The roots of Varni Brothers Corporation go back to 1933 when Attilio Varni started his beverage business on Ninth Street in Modesto; bottling, labeling and delivering local wine from casks and barrels to restaurants and taverns throughout the area. 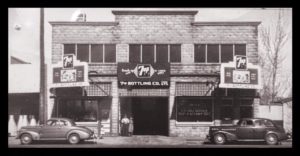 In 1936, Attilio had a franchise opportunity to bottle and distribute a 7-year-old brand from St. Louis called 7-up. It reminded him of a lemon-lime soda he had in Italy. The Seven-Up Bottling Company of Modesto was born. Hard work and dedicated promotion of the quality brand increased its popularity, to the point where Attilio needed to expand his business within the building that also had been occupied by his wife, Caterina Varni and her Modesto Ravioli and Noodle Factory.

Their three sons, Louis, John, and Fred, all worked with their parents from a very young age, limiting their childhood. They worked for long hours daily after school and on weekends. World War II interrupted their lives, and they all served their country. But they all returned to the business when their duty was through. All three brothers started their own families and continued to operate and grow their business after the early illness of their father, and his untimely passing.

Varni Brothers Corporation was born in 1960 as the three brothers continued to expand their business. They decided to capitalize on the opportunity to purchase Seven-Up Bottling Company of Stockton in 1963, to more than double their franchise’s size. Stanislaus Distributing Company developed as a beer and wine distribution business, selling Olympia and Hamm’s Beer, and Franzia, Inglenook, Robert Mondavi, Beringer, Mirassou, and Italian Swiss Colony Wines, operating separately from the soft drink division. Modesto became the sole bottling and also canning facility for Seven-Up Modesto and Stockton, as the business and the community continued to grow. And the beverage industry continued to change.

The third generation family members worked during the summer months and often after school like their fathers, and many entered the business as full-time employees, and eventually as management, as they matured. The industry continued to change dramatically. During the 1980’s the 7-up parent company had sold for what would be the first of several times. The Schmidt family that owned the Olympia Brewing Company sold too, as the brand’s popularity declined. The familiar wine brands were eliminated from the marketplace due to relentless competition. The changes opened the door of opportunity to branch out into “new age” brands, like New York Seltzer, Clearly Canadian, Jolt Cola, Hansen’s, and Snapple.

John and Fred Varni continued to lead the company into the 1990’s by expanding their line of beverages further. The third generation management team helped introduce and market more new brands including Kendall Jackson, Red Bull and Hansen’s, and developed the Varni owned trademark, NOAH’S California Spring Water. Distribution in Stanislaus and San Joaquin Counties continued to grow as the population in the Central Valley increased. The production facility in Modesto continued to expand and began its modernization.

The new millennium brought more changes to Varni Brothers Corporation. The energy drink, Rockstar, had a dramatic effect on the company in both sales and production. The distribution of soft drinks and energy drinks proved to remain successful for 7up of Stockton and Modesto. Stanislaus Distributing began distribution operations in Fresno selling NOAH’S Water, Rockstar, and other brands. From 2004 to 2006, the Modesto production facility grew to over 200,000 square foot, as a state of the art beverage plant, and has increased its production capacity tenfold. The facility is SQF (Safe Quality Food), GSFI (Global Food Safety Initiative) and HACCP Certified.

In 2007 Varni Brothers Corporation purchased the franchise rights for 7-up, A&W, Sunkist, RC Cola, Canada Dry, from parent company Cadbury Beverages (which later became the Dr. Pepper Snapple Group), to expand its territory into Calaveras and Amador Counties to complement its San Joaquin, Stanislaus, and Tuolumne County operations. Varni Brothers also has the Snapple franchise for Merced and Mariposa Counties. Rockstar is distributed by 7up Modesto and Stockton in the seven Northern Counties and is distributed by Stanislaus Distributing of Fresno in Madera, Fresno, Kings and Tulare Counties. More innovative beverages were produced, including Sofia Sparkling Wine in a can, from Francis Ford Coppola Winery. More warehouse capacity was added and quickly filled up.

In 2011, Varni Brothers Corporation celebrated its 75th year as the 7up Bottling Company of Modesto. With more than 250 people enjoying steady, full-time employment at the Modesto, Stockton, and Fresno locations. New brands, and new variations of existing brands evolve at the 7up Modesto facility. After acquiring neighboring property, the construction of another 27,000 square foot warehouse addition began. An additional 15,000 soon followed in 2013 making the total size of the facility 255,000 square feet and made room for a dedicated wine production line, and a new hot fill-capable bottling line for glass, PET, aluminum bottles, and Cap Cans, for a wide variety of new production customers. Exciting products were added to the distribution portfolio, like Sparkling Ice, Body Armor, Vita Coco, V-8, and Calypso Lemonade.

Varni Brothers Corporation has actively participated in the development of other products, including a new Cherry flavored brand extension for Cock ‘n Bull Ginger Beer. Varni leadership proposed and designed the artwork for the Cock ‘n Bull Ginger Beer 8.4oz can as well as the 12oz Sleek can and 4 pack. The newest Cock ‘n Bull package is the 24oz re-sealable CapCan. Varni Brothers also helped with the introduction and expansion of the 98-year-old Cheerwine brand from North Carolina to the Western States.

Varni Brothers have taken on more wine production in non-traditional packaging in recent years. Sparkling wine brands and mimosa expanded into the 187ml and 250 ml trim can sizes, along with wine coolers and hard ciders. Innovative StackWine production began in 2013, where four individual interlocking glasses of wine are stacked and wrapped, equivalent to 750ml bottles, but perfect for tailgating, poolside gatherings, and beaches. It is one of the most exciting recent beverage concepts of any drink category. And Common Cider began packaging their 4 pack 12oz sleek cans at the Modesto production facility in mid-2015.

In its 85th year, Varni Brothers Corporation is still completely family owned, and with 4th generation involvement. It is California’s only surviving family-owned franchise bottler of any major soft drink brand. It remains well positioned in a beverage industry that continues to quickly change as one of the most versatile beverage packers in the United States. Varni Brothers supports the community, supplying refreshment to countless schools, churches, fundraising organizations, and non-profits. Its leadership is active in the California Beverage Association and holds a Directors seat on the National Board for the American Beverage Association.